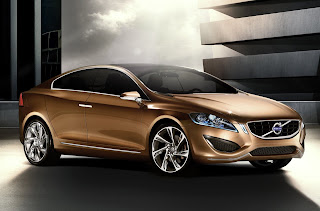 Next month in Detroit, the Volvo S60 Concept will serve up a teaser for the 2010 production sedan that'll likely debut later in the show season. The S60 Concept demonstrates that Volvo's new sedan will ditch the rather conservative duds it currently wears in favor of a new, much more aggressive visual ensemble. Profile views show off a coupe-ish roofline, while pointed headlights extend back onto the fenders and flank a reshaped, more detailed grille up front. The concept's rear is similarly detailed, with LED taillamps that hide the various signal colors until they are actually illuminated.
Posted by BeautyCars at 2:58 AM