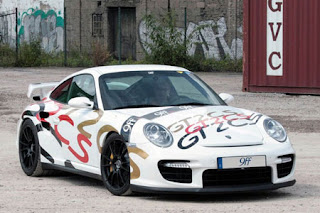 The Porsche 911 GT2 is hardly lacking for horsepower, but the 9ff crew can never leave "good enough" alone. With a pair of V670 turbos, a 9ff custom intake manifold, headers and exhaust system with a two-stage valve that takes the engine note from raucous to profane, the 9ff GT2 puts out 670 hp and 590 lb.-ft. of torque. Zero to 62 comes up in a supercar embarrassing 3.6 seconds and 124 mph is dispatched in a scant 9.8 seconds. Naturally, the ECU has been modified to make use of the additional boost and breathing mods, while simultaneously raising the rev limiter to 7,200 rpm. The additional power is shoveled to the transmission via a single-mass flywheel and racing clutch, while a coilover suspension does its best to keep the GT2 on terra firma at all times. And if having the ability to bully ZR1s, Enzos, and Carrera GTs isn't enough, a 910 hp version is on the way.
Posted by BeautyCars at 6:01 PM No comments: 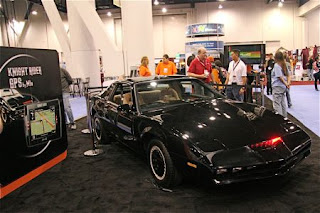 There were a lot of movie and TV-themed vehicles at SEMA this year, but one of our favorite entertainment tie-ins had to be the Mio Knight Rider GPS system. We told you about this way back in June, played with it when the new K.I.T.T. visited the Autoblog Garage, and messed with it some more in Vegas. It sounds exactly like you'd hope it would. "Michael, you're going the wrong way, you ninny," isn't in the regular playlist, but it did have some attitude. Even better than laying hands on the Mio, however, was the fact that K.I.T.T. ( no, not the Mustang) was actually in the Mio booth selling the product. It was almost too much to handle. As we told you in June, the Mio Knight Rider GPS unit uses the voice the one-and-only William Daniels, the original voice of K.I.T.T., and asks cordially "Hello Michael, where do you want to go today?" when powered up. The 4.3-inch LCD display is also flanked by a series of red LEDs reminiscent of K.I.T.T.'s nose-mounted lights. It's available for sale now at about $270.
Posted by BeautyCars at 5:16 PM No comments:

As much as we love its tires, we are really upset with Michelin. Where is the annual supercar lovefest that has been the Michelin SEMA booth? Last year's display was an incredible assortment of stock, tuned and race vehicles from Audi, Chevrolet and Porsche. The year before that the Michelin booth had a Caparo T1, Koenigsegg, RUF, Saleen S7, McLaren F1, Bugatti Veyron and Pagani Zonda. Those are tough acts to follow for supercar fans, so Michelin just decided to stop trying and didn't show this year. In all fairness, a lot of companies are absent or here with a much smaller setup. Something about the economy. Although it's a little tougher now, it's still possible for a SEMA showgoer to get a healthy dose of supercar exposure, though. It just takes a little more shoe leather or a click of your finger to see some of this year's supercars in our gallery below. In it you'll see cars from Mosler, Spyker, Ferrari, Lamborghini, Chevy, Factory Five, Porsche, Aston Martin and more. There were also quite a few race cars scattered around the halls this year that we thought you might like to see, as well. Check out the huge gallery by clicking on any image.
Posted by BeautyCars at 5:41 AM No comments:

Some Pic's for U. 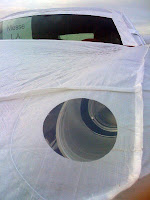 While covering this year's SEMA show from Las Vegas, i'm shocked i saw many girls but she's can be better for other whos like girls more than car i have some pic's.

Posted by BeautyCars at 4:47 PM No comments:

Posted by BeautyCars at 10:57 AM No comments: